TOPEKA CAPITAL-JOURNAL AND ASSOCIATED PRESS: KANSAS REPUBLICANS CREATED THE FIRE AT THE KANSAS DEPARTMENT OF LABOR

Topeka, KS – The Topeka Capital-Journal and Associated Press recently reported that IT improvements at the Kansas Department of Labor were halted by Republican Governor Sam Brownback’s administration and couldn’t be started again in time to prevent a fresh round of headaches during the COVID-19 pandemic. Kansas Republicans have been behind the Kansas Department of Labor’s (KDOL) woes dating back a decade. Yet today, Kansas Republicans politicize the department during an unprecedented pandemic, and the people who pay for it are Kansans.

TIMELINE OF KANSAS REPUBLICANS RECORD ON THE KANSAS DEPARTMENT OF LABOR

2011: Sam Brownback halted former Democratic Governor Sebelius’ modernization project that would have upgraded the labor department’s IT system. This upgrade would have prevented the issues seen during the pandemic. Republicans said nothing.

2011: Sam Brownback’s administration slashed KDOL’s budget — cutting it down to less than half of what it was two years prior. Republicans said nothing.

2011: Sam Brownback’s administration cut 20% of the staff at KDOL – shedding almost 150 positions over a year. Republicans said nothing.

2015: Under Sam Brownback, the software vendor Oracle proposed that KDOL do an upgrade to prevent fraud, after the administration already halted modernization. The IT architect on the canceled modernization project said accepting Oracle’s proposal would have minimized fraud. Republicans said nothing.

2020: As the pandemic rages and causes a surge in unemployment, Sam Brownback’s former Deputy Chief of Staff, Kim Borchers, weaponizes the mess she created against Governor Kelly for political gain. 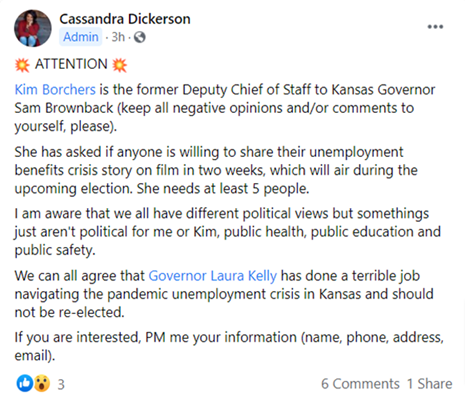 2021: Governor Kelly signs legislation to fast-track modernizing KDOL’s decades-old IT system.2021: Derek Schmidt fundraised off of the labor department’s woes, after a decade of silence on KDOL’s dismantling by the Brownback Administration. 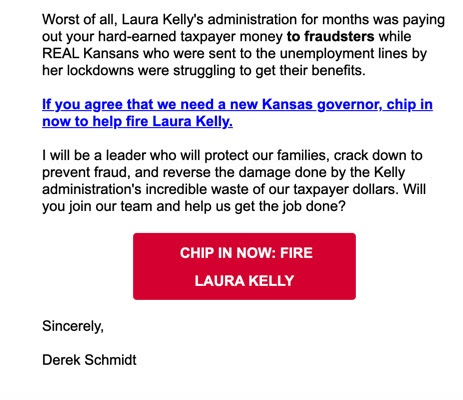