Welcome to the KDP Weekly Newsletter – the Kansas Democratic Party’s update of the biggest things going on in the state party and the state government. What are we focused on this week? International Women’s Day, 2022 Gubernatorial Race, American Rescue Plan, Vaccination efforts, Social Media Updates, KDP Merch and more! 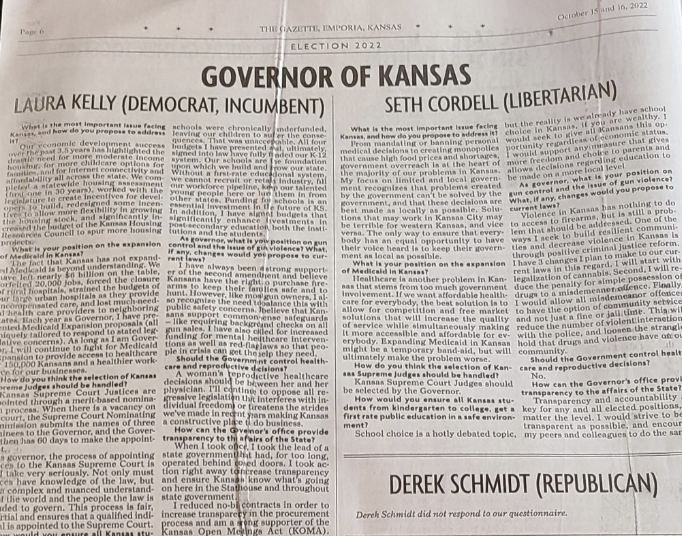 This week we celebrated International Women’s Day! Generation after generation, women have moved the dial on our most important issues & fought for a better world. Today, we celebrate all women leaders who have inspired progress across Kansas, including Governor Laura Kelly, Congresswoman Sharice Davids and Kansas Senate Minority Leader Dinah Sykes. We also offer our gratitude to women here at home and across the globe who lead the way in forging stronger communities — from saving lives on the front lines of the fight against COVID-19 to advocating for equity and the rights afforded to us all. We also recognize that there’s still much work ahead of our nation to fully ensure women’s equality. We need to come together and move the state of Kansas forward, defend the right to safe and affordable reproductive healthcare, and work to put an end to gender discrimination. 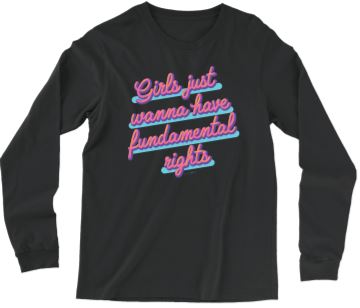 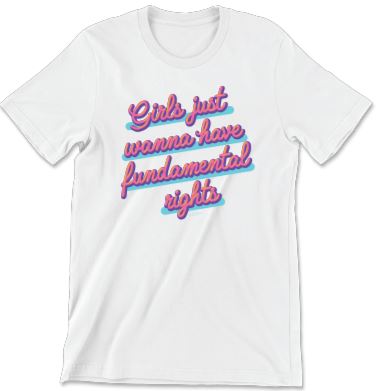 SENATOR SANDERS IS (VIRTUALLY) COMING BACK TO KANSAS 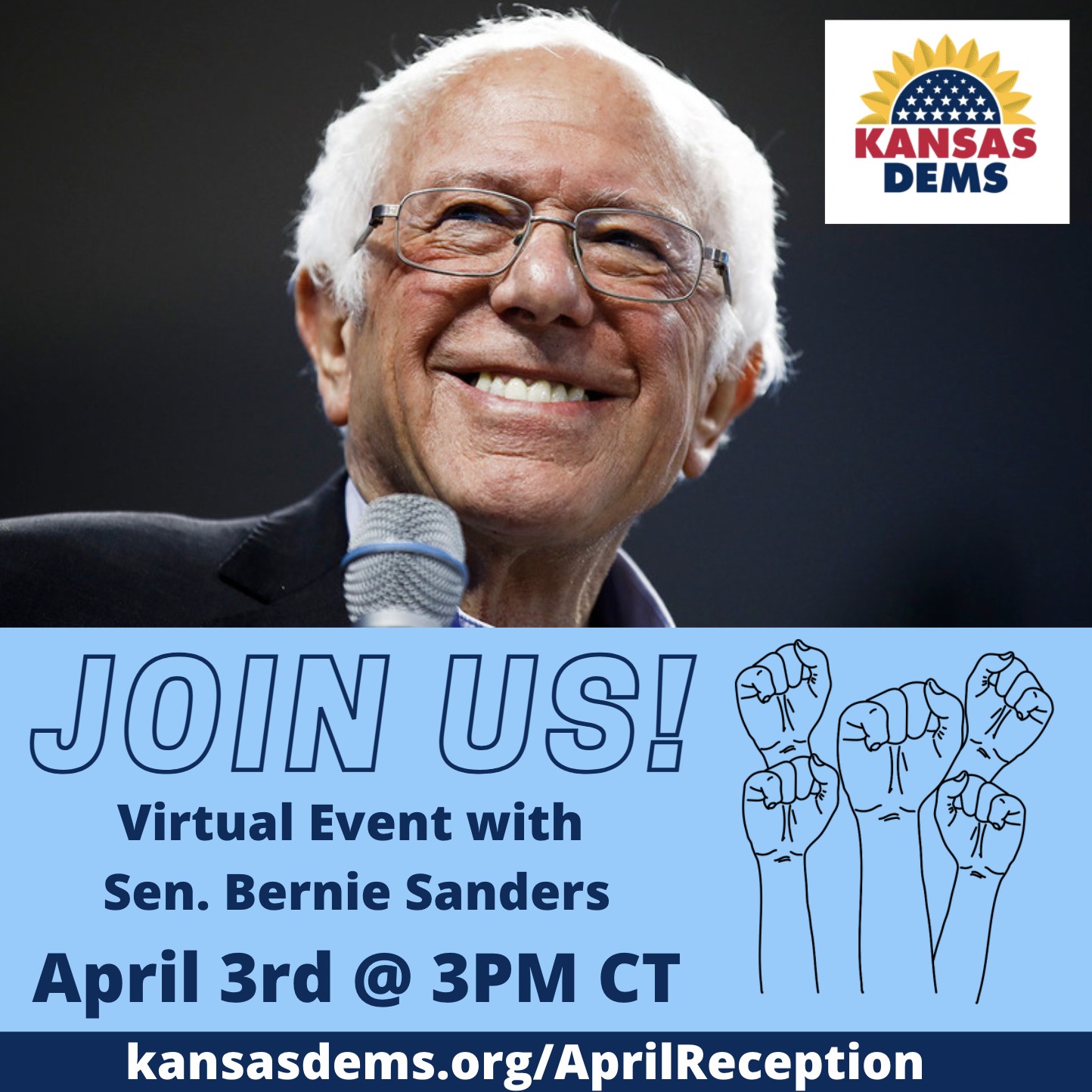 Join us on Saturday, April 3rd at 3:00p.m. CT as we host Senator Bernie Sanders for a virtual reception with Kansas Democrats. You’ll hear from the KDP Chair, Vicki Hiatt, and Senator Bernie Sanders, former Presidential candidate and the Chair of the Senate Budget Committee! This is an event you won’t want to miss, and tickets start at only $27.00.

Please click here for the State Party T3 Launch Kit to help promote T3 sign-ups in your own state!

“Today I’m announcing my campaign for governor with a mission to be your common sense, conservative voice and to fight every day for your family and our way of life,” Schmidt said in an online video announcing his campaign.

Schmidt, a Republican, was elected Attorney General in 2010, defeating incumbent Democrat Steve Six. He was re-elected in 2014 and 2018, to become the second-longest serving Attorney General in state history. Prior to being elected AG, Schmidt served as a Kansas State Senator, representing the Independence area in southeast Kansas. He chaired the Senate’s Agriculture Committee and was the chamber’s Majority Leader.

Now, they are hunkering down to push the next priorities in Biden’s agenda forward past what, so far, has been a wall of entrenched Republican opposition in the so-very-split Congress. It’s likely to be a long slog.

Popular legislation to expand voting rights, raise the minimum wage to $15 an hour and develop the president’s “Build Back Better” infrastructure package are all on deck this spring and into summer. But unlike the relatively quick passage of the American Rescue Plan, halfway through the president’s first 100 days, sending the next measures to Biden’s desk is expected to take many months. Democrats are even considering changing historic filibuster rules to overcome opponents and speed the bills along.

(Topeka Capital Journal) – Kansas remains one of 12 states to not adopt provisions of the Affordable Care Act, which would expand Medicaid to at least 130,000 to 160,000 low-income people.

But Congress is expected to pass its next COVID-19 relief package Wednesday, and national Democrats have tucked in a section aimed at enticing states that haven’t expanded Medicaid to do so.

Under the proposal, Kansas would get a temporary increase in federal match funding of five percentage points for two years for current enrollees, if it expands Medicaid. Currently, states that have expanded receive a 90% federal matching rate for those covered under expansion.

“We need to build on the progress of the Affordable Care Act, not tear it down in the middle of a global pandemic,” U.S. Rep. Sharice Davids, D-Kan., had said when pushing similar Medicaid-incentivizing legislation last year.

According to estimates from the Kaiser Family Foundation, the incentive would lead to an additional $450 million in federal funding for Kansas. That boost could well cover the projected cost of expansion over two years, about $210 million, leaving a net plus of $250 million.

(Wichita Eagle) – Kansas’ two Republican Senators have staked out different ground on how best to distribute the COVID-19 vaccine. One recommends listening to government scientists. The other says apply science to the needs of the moment.

In a Wall-Street Journal op-ed Monday, Sen. Roger Marshall argued that health officials should deliver a single dose of the Moderna and Pfizer vaccines as widely as possible rather than ensuring that second doses are administered on the established timetable.

Marshall’s recommendation runs contrary to the protocol established by federal government, which calls for two shots of either Moderna or Pfizer. The Johnson & Johnson vaccine requires just one dose. Many elected officials use the phrase “follow the science” to explain their positions.

Marshall, an OB-GYN , said in his op-ed that this was the “most regularly abused” phrase he’s heard in Congress, and that scientific theory needs to be applied to the conditions on the ground.

(Kansas City Star) – In a packed committee room Tuesday the Senate Education committee rushed through more than 20 conferees on the measure in an hour, leaving no time for questions.

Opponents decried the bill, called the “Fairness in Women’s Sports Act,” as unlawful discrimination that would place transgender youth at risk of bullying and self harm. The ACLU of Kansas is pledging to sue if the measure passes.

Proponents, however, say it protects opportunities provided to women through sports and Title IX, the federal civil rights law that bars sex discrimination in educational programs or activities receiving federal money. Sen. Renee Erickson, a Wichita Republican who sponsored the bill, said those opportunities are under threat.

Current and former female athletes told the committee of the benefits they’d derived from sports and argued those would be eliminated if “male” athletes were allowed to participate.

“I cannot imagine trying to compete against people who had different advantages than I had and I was born with,” said Caroline Bruce McAndrew, a former Olympic Swimmer from Wichita.

KANSAS RANKED #6 IN US FOR UNEMPLOYMENT IMPROVEMENT FOR WEEK

(WIBW) – There’s a light at the end of the tunnel for the Kansas Department of Labor. KDOL is one of the country’s most improved agencies when it comes to processing unemployment claims. Kansas makes the list this week at #6 according to an analyst at WalletHub.

The past few weeks KDOL has worked hard to roll-out targeted improvements a $1.4 million dollar technology upgrade, the onboarding of 500 more customer service reps, and this weekend, a server upgrade. A WalletHub analyst told us that Kansas is really the only state to see such a significant improvement.

“Kansas is very interesting because since last week it ranks 6th best. So, essentially its unemployment numbers have decreased 6th most in the country just for the week–that’s great,” Jill Gonzalez, a WalletHub analyst explained. “But, compared to the start of the crisis it ranks 47th–very close to the bottom.”

(WIBW) – Governor Laura Kelly went to McFarland for the first cycle of investments from the broadband grant program.

“Following a robust application process–14 projects have been selected to receive grants this year $5 million in Broadband acceleration grants will be combined with each applicant 5% matching contribution making it a total of $10 million in broadband investments for Kansas communities,” said Kelly.

Governor Kelly says expanding Broadband will be a game-changer for Kansans.

“Broadband access has been a problem in Kansas and across the country for years–expanding access of affordable quality high-speed internet has been one of my top priorities, we know this is a game-changer particularly for rural and underserved areas of our state–we know broadband connectivity can close the equity gap in communities and bridge the urban-rural divide,” she said.

Broadband was introduced to help support economic development opportunities and provide network affordability, but the Covid pandemic has emphasized the need even more.

“This will improve access to health care through Telehouse services and it allows kids to have access to virtual school and ensures that businesses can compete and thrive in a digitally focused economy,” explained Kelly.

Kelly says this is the first time that state funds have been specifically dedicated to expanding high-speed internet. 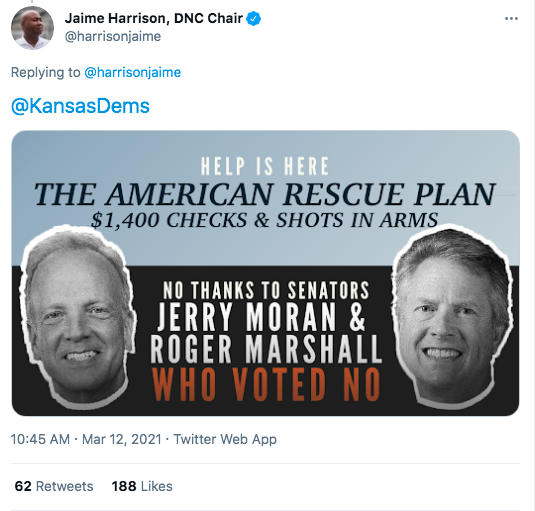 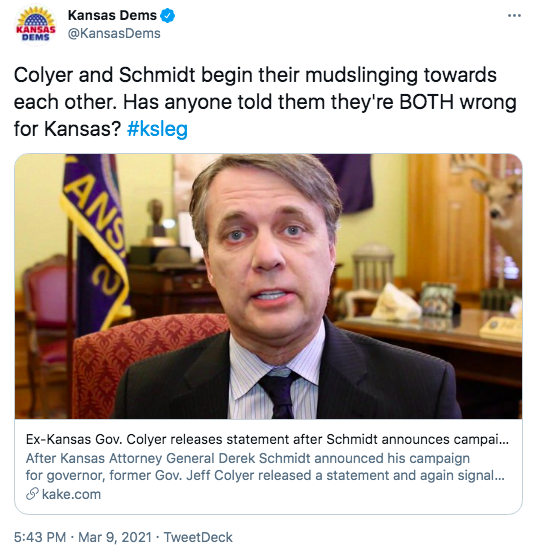 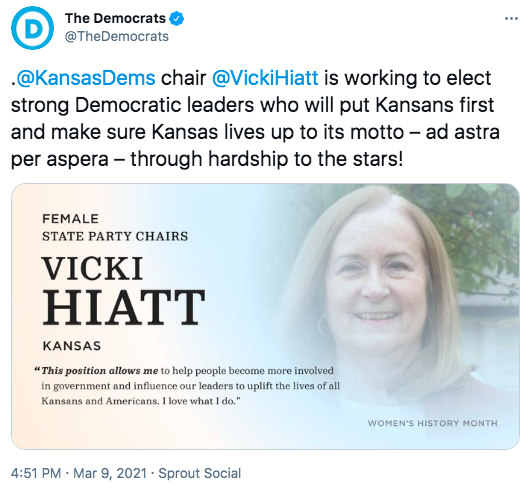